Youth participation in the labour market: how stable, how efficient, how fair? Conference on the situation of young people not in education, employment or training 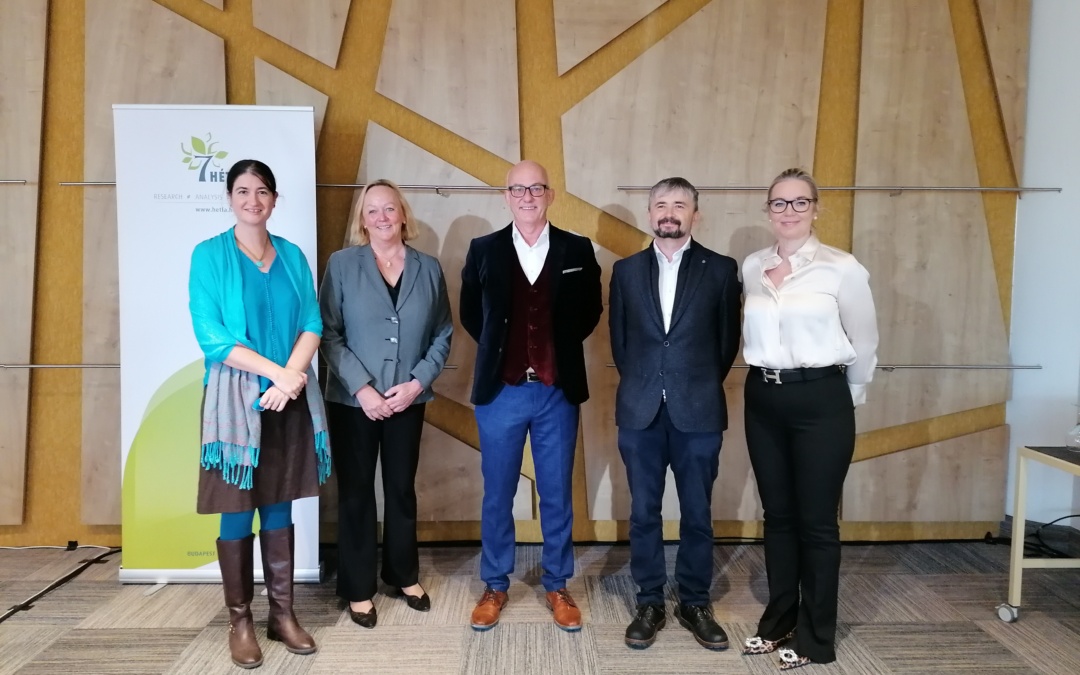 On 17 November 2021, HÉTFA Research Institute and InterRegio Forum Association organised a joint conference focusing on the situation and support of young people who are not in employment, education or training (NEETs). The conference introduced some of the organisations and programmes aiming to help the NEET young people.

The conference was the final event of the project ‘Individual Placement and Support for NEETs through Education Youth Technology Platform (EYTP)’ (IPS4NEETs) targeting young people who are not in employment, education or training (NEETs). InterRegio was a partner in this project, while HETFA coordinates the Lost Millennials project (Transnational research network for the evaluation of initiatives targeting 25+ NEETs) funded by EEA and Norway Grants Fund for Youth Employment, also targeting the same group of young people and the professionals tackling their problems.

Trine Skymoen, Ambassador of Norway to Hungary opened the conference. She emphasized that youth unemployment is a common challenge for Europe and that common solutions are needed. Today, 14 million young people in Europe are not in education or training and are not present in the labour market. The reasons are complex, including crises experienced by the young generation, such as the economic crisis of 2008, and the COVID-19 pandemic, which has had a significant impact on young people’s life. Closing the gap between labour market opportunities of men and women is of utmost importance, as one in five young women in Europe is not present on the labour market. The EEA and Norway Funds for Youth Employment therefore focus on improving opportunities for young people.

The Lost Millennials and IPS4NEETs projects are funded by Iceland, Liechtenstein and Norway through the EEA and Norway Grants Fund for Youth Employment.

The conference recording is available online.(mostly in Hungarian)

HÉTFA Research Institute’s findings regarding the situation of NEETs

Due to Hungary’s rapid recovery from the crisis imposed by the COVID-19 pandemic, employment rates are increasingly improving. They show no considerable discrepancy to the pre-pandemic rates, in fact, a shortage in labour force is becoming noticeable. Meanwhile, youth (aged between 15-24) unemployment rate grew by 3,3% (Hungarian Central Statistical Office, 2021), revealing that a quarter of all those unemployed in the country are from the youth age group. This data points out that young people are still facing difficulties entering the labour market. Being unemployed at the beginning of an individual’s working years may leave a negative impact on their entire career.

Recent years were marked by a steep incline in the labour market in Hungary. The number of jobseekers dropped, while the number of employed individuals was at a high. While the recession experienced due to COVID-19 diminished in most labour sectors by now, Hungary is battling double difficulties: on the one hand, that of the labour force shortage, and on the other hand, that of prolonged unemployment in certain groups of society. Considering the population’s ageing, it is becoming increasingly vital that as many young people as possible find their way early to labour market, and transition to employment smoothly. According to Eurostat (2020), nearly 14,7% of young Hungarians are not in employment, nor in education or training (NEETs). They are those who did not join the labour market upon finishing their training, or they dropped out from it later.

In terms of NEET rates, Hungary is close to the median of other EU member states, still, their number has increased as an effect of the pandemic. Those having it most difficult seem to be those young people with low qualifications living in small rural municipalities, and the number of NEETs is twice as high in the economically disadvantaged regions than in cities. These young people often do not have any job experience, they have unrealistic expectations regarding work options available for them, and they are lacking key skills that would help them find employment. Following a series of unsuccessful job seeking attempts, they may lose their motivation and sink into hopelessness, or turn to unregulated and precarious means of breadwinning. Starting out a career as unemployed may have a long-term impact on young people’s motivation, career progress, perspectives and prosperity – thus, the age group in question is sometimes referred to as a ’lost generation’. According to Hungarian and Europe-wide records, women are even more vulnerable to dropping out of the labour market than men, as balancing their childcare activities with work hours and a private life is still made difficult for them.

The COVID-19 pandemic and its impacts, as a normative crisis of the young generation

Following the first year of the pandemic, the Hungarian economy and labour market started to re-emerge in 2021. Unemployment rates returned to their pre-pandemic levels and signs of labour force shortage reappeared. Meanwhile, the unemployment rates of those aged between 15 and 24 increased by 3,3% (Hungarian Central Statistical Office, 2021). A quarter of all unemployed Hungarians is constituted by youth, prompting us to conclude that increasing young people’s access and opportunities is of key importance.

COVID-19 posed novel challenges to the young generation, threatening with an increase in dropout rates from schools, as well as isolation and loss of motivation due to the transition to digital learning, thus, the pandemic severely impacted the mental wellbeing of youth, too.

The majority of youth is in employment or training

According to the Youth Research Institute’s 2020 results, the rate of NEETs is at 10% in Hungary. Of those young people outside employment or training, the majority are on parental leave (61%), 10% of them received government support for jobseeking, while 17% were seeking jobs without government support, and 15% claimed they were inactive homemakers in 2020. The rate of employed young people did not decrease due to the pandemic (it increased from 54% in 2016 to 55% in 2020), and flexible employment arrangements became more widespread (with 12% being part-time employees, 18% working flexible work hours, and 2% working from home). The majority of employed youth (56%) felt secure in their workplace, and only 8% planned on changing jobs. Young people’s salary expectations also increased, from 242 thousand forints in 2016 to 348 thousand forints in 2020. Those still in education claimed to be optimistic regarding their job search, and over half of them believed to be able to find employment within a few months after finishing their training or studies.