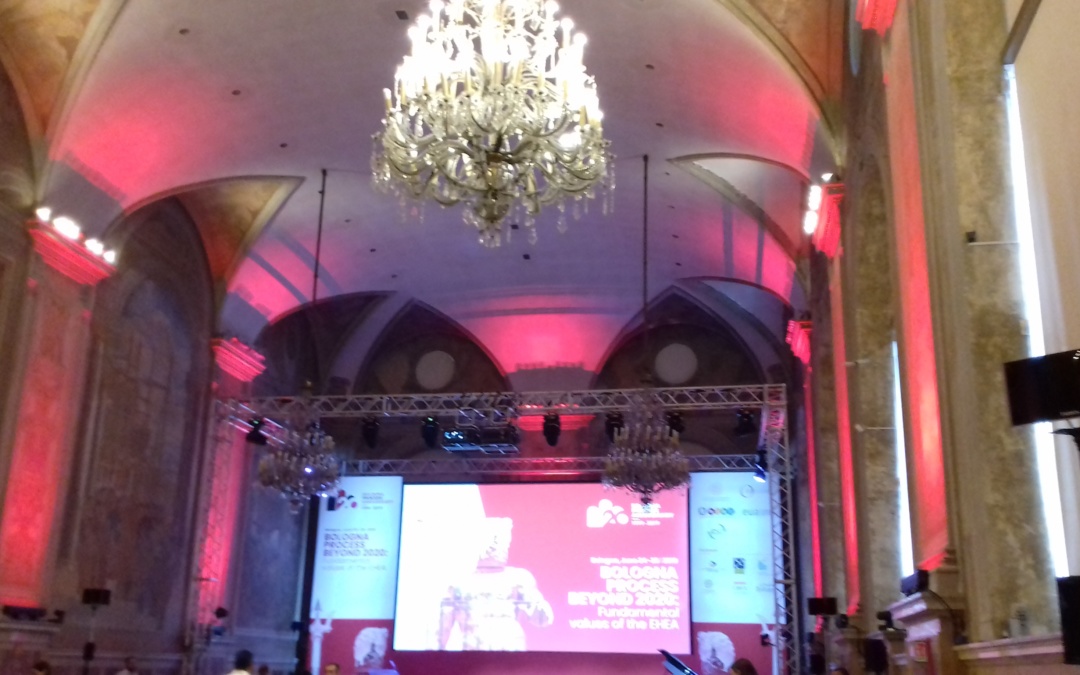 As the coordinating institution of ifempower project, HÉTFA was invited to take part at the Transnational Cooperation Activity organized in Bologne between 25-27 June, 2019. The event consisted of the conferences organized for the 20th Anniversary of the Bologna Process and Fostering Erasmus+ cooperation projects’ impact and cross-fertilization on social inclusion and civic engagement”.

The event celebrating the launch of the Bologna process was intended as an analytical as well as agenda setting one contributing to the design of the process and the further development of the European Higher Education Area (EHEA). Five parallel sessions gathered speakers and experts with a high renomé in the fields related to academic values, student centred learning, social responsibility, sustainable development and carriers and skills for the future labour market. The outcome of these sessions unanimously underlined the role of students in all processes aiming at the improvement of the current Higher Educational System, the dialogue among the various stakeholders, the necessity of digital skills and literacy as well as social inclusion.

Although huge improvement has been reached since the launch of the Bologna Process, participants agreed that important and new challenges are ahead which require cooperation at transnational level among actors instead of competition, as well as dialogue among the different actors, including policy makers, academia, professors and teachers as well as students.

Our colleague, Virág Zsár, Coordinator of the Division for International Cooperation attended also the event for Erasmus + project coordinators which primarily focused on social inclusion. Three workshops were organized related to the different aspects of social inclusion, the first on opening up higher education towards third sector organizations, the second on the role of HEIs in the inclusion of disadvantaged students, and the third on promoting democracy and intercultural dialogue. During the sessions good practices and transferable outputs of the invigted projects were presented leading to interactive discussion among participants.

Innovative methods were also demonstrated during the workshops which may result in advanced impact of strategic partnership, such as co-creation, co-management, co-design with students; the university as science shop; service learning.

The conference was ended by the presentation of Harpa Sifarnarsdottir, project officer at DG EAC on the future of Erasmus + programme. This lecture introduced the frame of the new programme which is currently under preparation focusing primarily on the results of the Erasmus + impact study and on broad expert and beneficiary consultations. The current feature of the programme is promising with regard to the increased budget, intentions for further simplification but also for promoting more and more intensive cooperation among the actors of the educational and training sectors.