Metropolitan Business Forums with the collaboration of HETFA 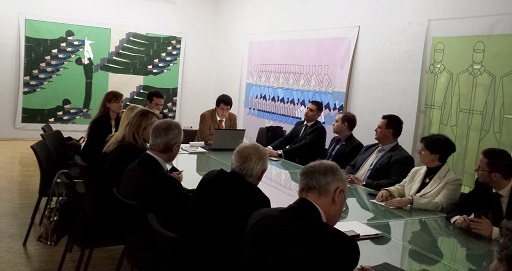 The Municipality of Budapest with the coordination of HETFA, organised a business forums in the framework of the creation of the metropolitan development programme for economic stimulus and job creation. The aim of the forums was to get to know the point of views of the most important economic actors of the capital on the economic development plans of Budapest.

One of the central topics of the meetings was how the regulatory environment can support the businesses in the capital. Besides, the participants examined the question: what forms of cooperation between the municipalities of the capital and the districts and between the businesses can help the development of Budapest’s economy. Apart from the workshops, HETFA uses surveys to get to know the ideas and experience of businessmen related to the development of the economy.

The first meeting was held on the 17th of March with the participation of the Hungarian Industrial Association. According to the businessmen present there, the most important tool of economic stimulus would be the creation of business points in the districts. These would help the foundation of businesses and the creation of networks among SMEs. Besides, they could have a role in the creation of successful cooperation between companies and municipalities.

On 18th of March the workshop was organised by the National Association of Entrepreneurs and Employers. It has been said as an advantage there that the local enterprises in Budapest can access loans with suitable conditions. According to the businessmen, however, it poses a problem that different districts set different conditions to the local businesses.

On the 19th of March, members of the Young Entrepreneurs Association Hungary shared their thoughts with the professional coordinators of the forums. In their view, the strengthening of the tourism could be the most successful way of economic stimulus in the capital, because it could have a favourable influence to other sectors, too. They noted that the Municipality of Budapest could help the networking among businesses with organising similar forums. According to them, the often unpredictable and changing regulatory environment hardens the functioning of businesses.

On the 23rd of March, businessmen and civil society organisations in contact with the Design Terminal could express their opinions about the economic stimulus to Budapest. According to their view, Budapest can provide the incentive environment, which is needed to the high value-added activity of innovative entrepreneurs and thinkers. These companies, however, move the production to the countryside due to the low accessibility of project funding in Budapest. It was also said that a small amount of incubator house functions in the capital and there is not enough office space that can accommodate start-ups. This is a hardly remediable problem, because for this bubbly environment, the capital can really mean a useful space.

On the 31st of March, the coordinators of the project could get the opinions of the members of the American Chamber of Commerce in Hungary. According to the representative of AmCham, the infrastructural supply of Budapest is outstanding compared to other cities in the country. The participants, besides other remarks, raised attention to two important problems. Certain sectors are suffering from the lack of well-trained engineer experts, and the rate of employees speaking foreign languages is low. They saw an opportunity in the idea that Budapest creates a marketing strategy together with other Hungarian bigger cities. This could help the attraction of foreign businesses into Hungary, because as an investment target, other parts of Hungary can be sold through Budapest in the easiest way. Moreover, in this way, offering more places for investment, the capital can also become a place for bigger and more complex investments.

On the 1st of April, the members of the Association of Hungarian Hotels and Restaurants took part in the meeting. They mentioned that the number of visitors in Budapest is growing year by year and a more and more favourable Budapest image has been created. However, they said that a marketing activity targeting tourist with high solvency and plan of longer stay is really important. In order to brainstorm on this, they urged the creation of the tourism strategy of Budapest. They raised the attention to contradiction between the two-level municipality system and the integrated touristic area. According to their opinion, this pulls back important developments in the capital and hardens the daily administration related to the hosting of tourists.