On 10th May a special installation was opened in Veszprém, at Szabadság tér. Think Freedom is an urban spectacle and multi-disciplinary art installation by renowned Bosnian-American artist Edina Seleskovic, which arrived to the city with the support of our colleagues from the Division for International Cooperation.

A long way led to the implementation, started by the contribution of HÉTFA in connecting the artist with the city more than a year ago, continued by the assistance of the coordination during the complex implementation in Hungary.  Finally, the piece, supported by a grant of the United States Embassy of Hungary, was created in partnership with the City of Veszprém and in collaboration with young people from six Hungarian cities. The installations’ main aim is to communicate the thoughts of young people from different countries about freedom. Apart from this, the project contributes to celebrate the 30th anniversary of the 1989 regime change in Hungary.

The project began in Sarajevo in 2015 and since then, continues its way through different countries to connect young people from all over the word through art creation, and collect their messages about freedom and peace. The final destination will be New York in 2022. Think Freedom will be installed in the city at Daag Hammerskjold Plaza, overlooking the building of the United Nations.

Think Freedom is the mission and vision of the artist, Edina Seleskovic, who educates during the workshops she holds and all parts of the preparation. By the project’s start in Hungary, Edina held workshops in six Hungarian cities for high-school students about freedom. What does freedom mean to you? was the question she collected answers for, which are, afterwards, written on the sculptures created with the contribution of art and design students.

At the end, the installation was composed of dozens of sculptures of peace, constructed individually from silver colored metal suspended in an enormous flock representing freedom without borders: a flight moving forward – moving towards a brighter future. The installation in Veszprém is visible until the end of May. 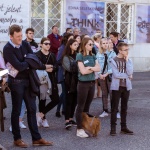 Think Freedom also provided a great opportunity to Veszprém in creating synergies between its projects and partners, since the HÉTFA moderated ENriCH event took place on the same day as the opening of the installation. Creating these kind of synergies and hosting projects which collaborate with youth, decision makers and even with citizens on the field of culture, heritage and art repesent an important part of preparations for 2023 when Veszprém will be the European Capital of Culture.